‘Bombshell after bombshell’ dropped as Jan. 6 testimony homes in on Trump guilt

Democracy defenders responded to Tuesday’s testimony by a former Trump administration aide before the January 6 committee by demanding that the former president and his co-conspirators be held to account in the face of increasingly incriminating evidence of their culpability for the 2021 insurrection.

Cassidy Hutchinson, who served as a special assistant to Mark Meadows, former President Donald Trump’s last chief of staff, revealed what the consumer advocacy group Public Citizen described as “bombshell after bombshell” during her in-person testimony to members of the House Select Committee to Investigate the January 6th Attack on the United States Capitol.

Lisa Gilbert, executive vice president of Public Citizen and co-chair of the Not Above the Law Coalition, said in a statement that “in the reams of evidence against Trump and his allies, Hutchinson’s testimony of the deeply detailed plans of January 6 and the inaction of those in the White House in response to the violence show just how close we came to a coup.”

“Her testimony comes at a critical point in the hearings, showing the conspirators knew what they were doing was illegal, and knew it could result in violence, yet they proceeded anyway,” she added. “And that once the violence was ongoing, the president refused to act.”

Among other things, Hutchinson testified that:

“Trump and his chief of staff Mark Meadows were warned repeatedly of anticipated violence on January 6th yet did nothing,” Common Cause president Karen Hobert Flynn said in response to Hutchinson’s testimony. “They were informed of semi-automatic rifles and pistols—AR-15s and Glocks—being carried by members of the audience on the Ellipse, hours before his speech, yet Trump incited the crowd and called on his heavily armed audience to march on the Capitol and ‘fight like hell.'”

The armed and vicious mob he sent to the Capitol on January 6th was the final desperate act in a monthslong, multi-layered criminal conspiracy by former President Trump and his henchmen to ignore the will of the American people and overturn the legitimate results of the 2020 election by any means.

His actions and inaction as the insurrection unfolded, outlined in sworn testimony to the January 6 select committee, [are] jaw-dropping, un-American, and yet another warning to us all. Just when we think accounts of the actions of the former president and his inner circle can get no worse, we learn that in fact it can.

Gilbert of Public Citizen said that “Hutchinson’s testimony blows any notion of plausible deniability surrounding January 6 out of the water. She said Trump knew his rally crowd was armed, but said they weren’t there to hurt him. He encouraged an armed crowd to go to the Capitol, and told them that he would be with them.”

Progressives said Tuesday’s testimony underscored the imperative for accountability for Trump and members of his inner circle. 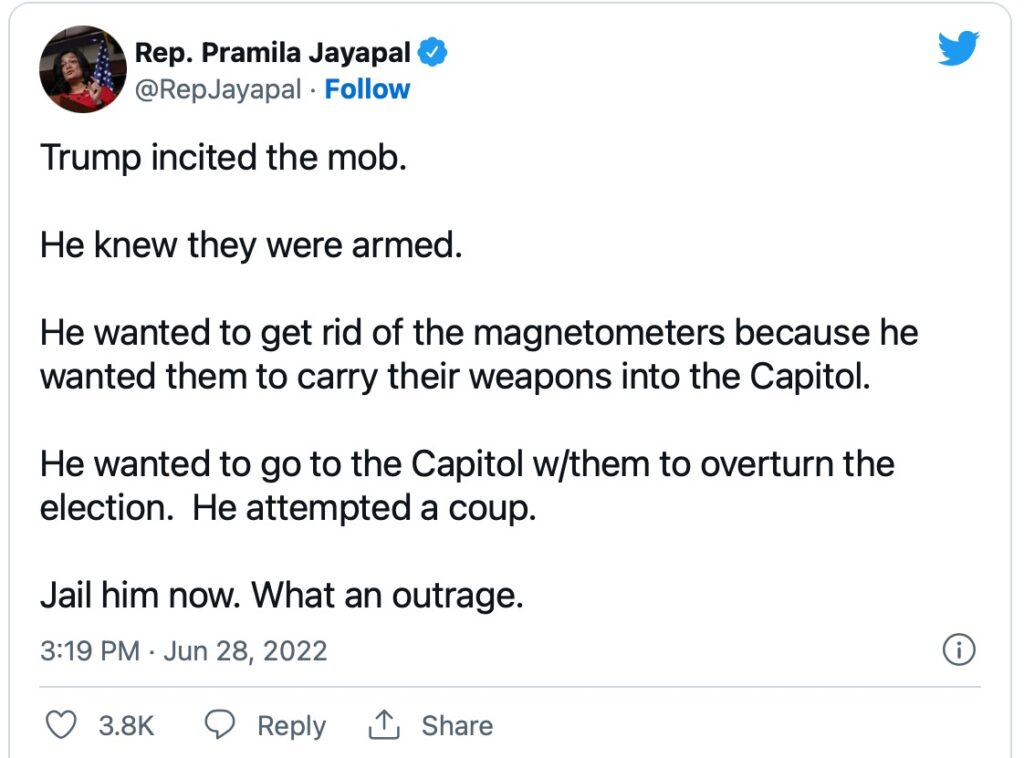 Rep. Mark Pocan (D-Wis.) tweeted that Trump “knew dangerous weapons were headed to the Capitol. He knew Congress was the target. He said the VP deserved to be hung for upholding the Constitution. He attacked a member of his Secret Service. He incited an insurrection.”

Common Cause’s Hobert Flynn asserted that “the former president and his co-conspirators must be held accountable by the Justice Department and any other authority with jurisdiction, including by state or local officials where parts of this scheme were plotted and carried out.”

Echoing Hobert Flynn, Gilbert said that Hutchinson’s testimony “makes it absolutely clear that Donald Trump remains a danger to our democracy and to our nation.”

She added, “There must be accountability for the criminal conspiracy to steal our votes that ultimately led to the violence on January 6 that we now know the administration anticipated, and that Trump encouraged.”

No concession from Bolsonaro — but staff say transition to proceed (+Español)