Russian Ladas are on their way to Cuba

A shipment of 344 Lada automobiles — models Vesta and Largus — is about to leave Russia and should arrive in Cuba early in January, reports the Russian newspaper Kommersant. The automaker, AvtoVAZ, calls the Cuban market a priority in Latin America and hopes to increase shipments, the paper says, but export specialists in Russia downplay the enthusiasm, saying that Cuba can’t affort to buy more than 500 cars per year.

The Ladas will be used by local taxi companies and leased to the tourism industry. The current delivery is backed by the Russian Export Center.

“Cuba remembers and respects the Lada brand,” said Nikolya Mor, president of AvtoVAZ. On the island “you can still see a significant number of classic models — for example, the Lada 4×4 — and today we are ready to resume our presence.”

AvtoVAZ (VAZ stands for Volga Automobile Plant) is situated in the city of Tolyatti, in the Samara region of Russia. Beginning in the early 1970s, it sold Lada brand automobiles to Cuba, a vehicle patterned after the FIAT family cars. Thousands of those old Ladas can still be seen on Cuban roads.

Lada was the export brand for cars sold in Russia as Zhigulis.

Indeed, the old Ladas on the island are in dire need of repairs or replacement. In 2013, the Cuban Transport Ministry said that it needed original spare parts for 90,000 Ladas. At the time, the car market was strictly limited; special permits were required for the purchase of cars and only cars produced before 1959 could be freely sold or bought. 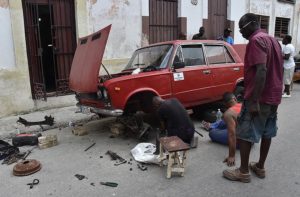 Later, the liberalization of the car market grew, but it still remains small. According to OICA, the Paris-based International Organization of Automobile Builders, in 2016 sales of cars in Cuba rose by 47.5 percent to 5,900 units. Other estimates vary: London-based financial advisors Ernst & Young estimated the 2016 market at 4,400 cars and the 2017 market at 4,700.

The reasons for the limited sales include the low purchasing power of the Cuban population, the U.S. economic blockade, which bars the use of U.S. dollars, and the method of payment selected. AvtoVAZ is interested in being paid in cash, whereas the Cuban government proposes a commodity exchange in which Cuba pays partly with sugar, cigars and rum.

AvtoVAZ — Russia’s largest car maker — has not sold any vehicles to Cuba since 2005 and is interested in resuming that trade as part of its export strategy, Mor told reporters in March of this year. He did not elaborate on the cost of this trial run.