Congresswoman Alexandria Ocasio-Cortez pilloried the world’s richest person and Twitter’s new owner, Elon Musk, on Friday after he used the social media platform to equate the far-right and the far-left, implying that both are hateful.

“The far-left hates everyone, themselves included!” said Musk, the chief executive of Tesla whose net worth has skyrocketed to more than $200 billion during the Covid-19 pandemic. “But I’m no fan of the far-right either. Let’s have less hate and more love.” 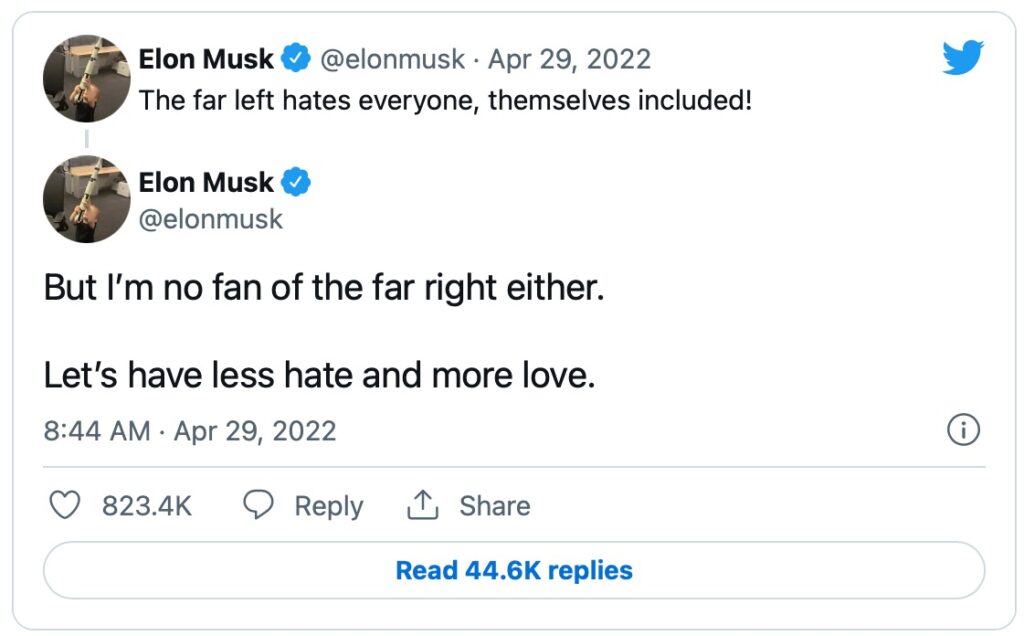 “In Texas, Republicans passed a law allowing rapists to sue their victims for getting an abortion,” Ocasio-Cortez (D-N.Y.) responded incredulously. “Can anyone name a ‘far-left’ policy that extreme implemented anywhere? We can’t even get our party to import cheaper prescription drugs from Canada.” 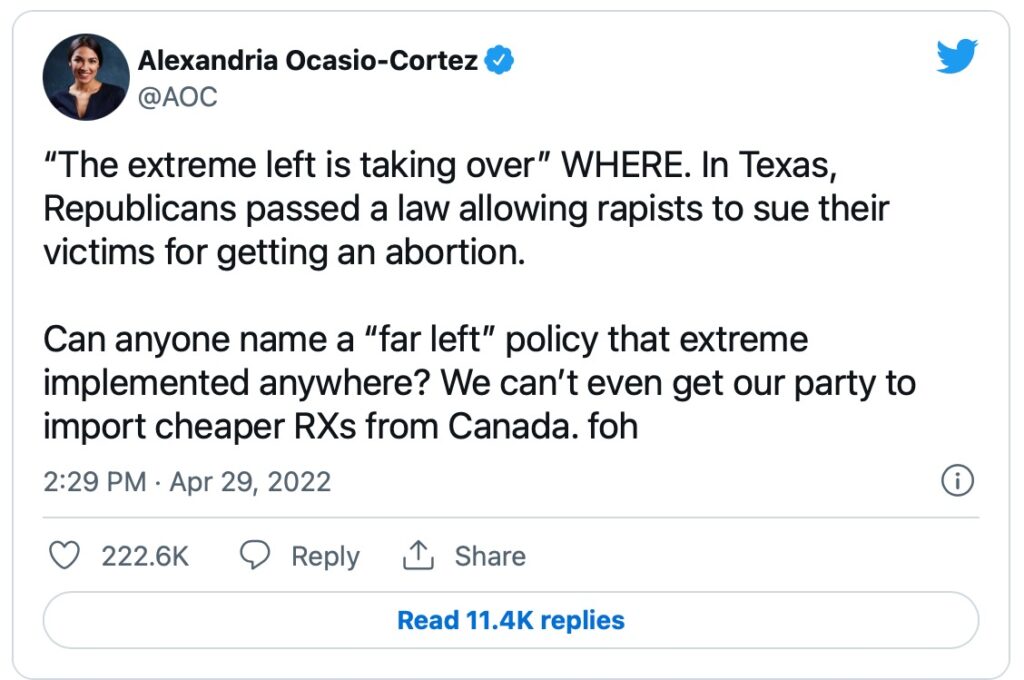 Musk’s Friday comments came less than 24 hours after he shared an image arguing that a “conservative” occupies the same ideological territory today as in 2008 while a “liberal” has moved increasingly leftward and become a “woke ‘progressive'” unrecognizable to a centrist who once had more in common with the left but is now closer to the right.

Musk’s argument about a supposed leftward shift couldn’t be further from reality, according to critics.

Setting aside the fact that the Democratic Party as a whole has moved toward former President Ronald Reagan on many economic, carceral, and immigration policies since the late 1970s—resulting in more than four decades of bipartisan neoliberalism, which has only recently been challenged by a growing minority of progressive lawmakers—the Republican Party’s rightward shift, which has been intensifying for decades, is completely ignored by Musk.

Georgetown University professor Don Moynihan responded to Musk’s post by sharing evidence from the Pew Research Center that shows how increasing political polarization in the U.S. Congress is being driven primarily by Republicans moving further and further right—not the other way around. 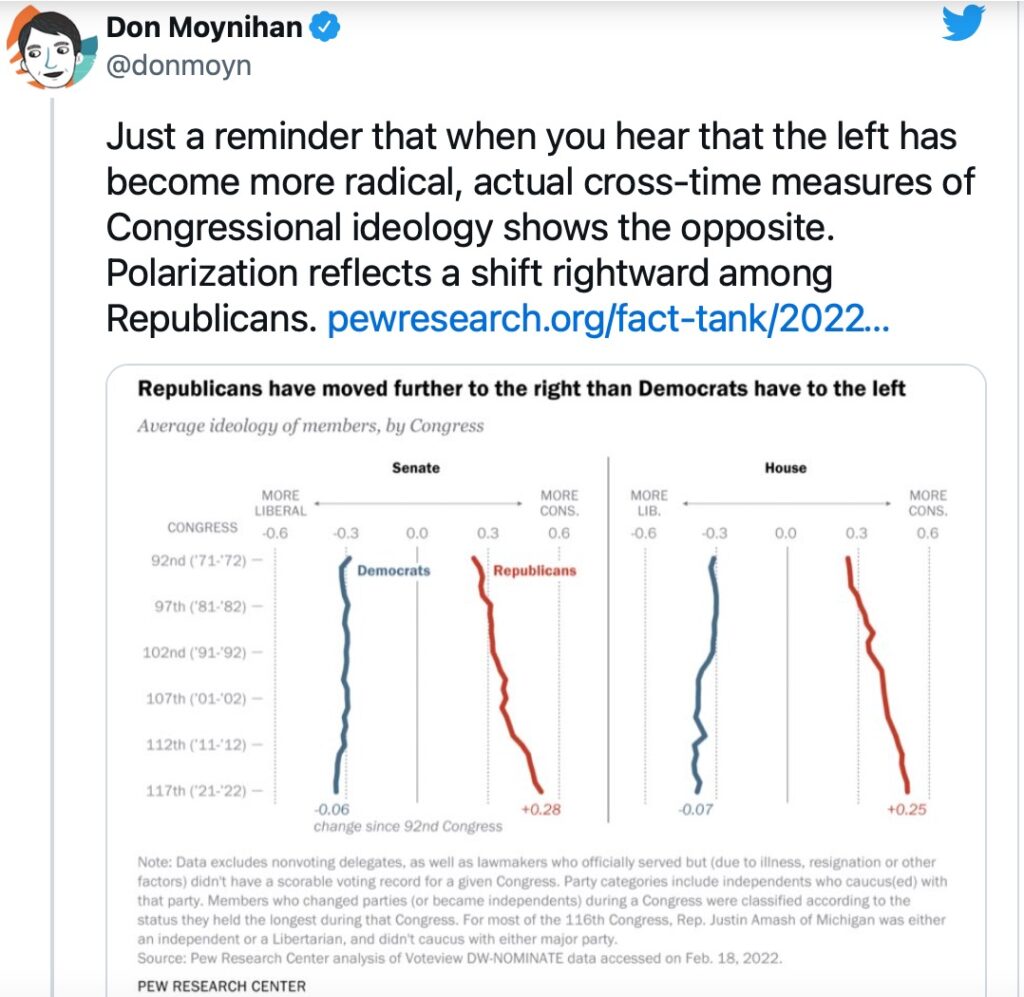 According to Pew’s March analysis of lawmakers’ roll-call votes, “Democrats and Republicans are farther apart ideologically today than at any time in the past 50 years.” While Democrats have become slightly more liberal on a two-dimensional spectrum, Republicans have become “much more” conservative.

To take just one example of the GOP’s creeping authoritarianism, Republican senators in 2006 voted unanimously to reauthorize the Voting Rights Act of 1965. Last November, only Sen. Lisa Murkowski (R-Alaska) joined Democrats in a failed bid to restore the landmark pro-democracy law.

Fueled by former President Donald Trump’s “Big Lie” that the 2020 presidential election was stolen, Republican lawmakers at the state level have embarked on a nationwide assault on the franchise, passing 34 voter suppression laws in 2021 and introducing dozens more this year.

The GOP has also gone on an unprecedented censorship binge in recent months, banning books and threatening the job security of teachers across the nation. In addition, Republicans have been attacking abortion rights at a dangerous clip, as Ocasio-Cortez alluded to, as well as LGBTQ+ rights.

Meanwhile, progressive lawmakers who are advocating for universal access to healthcare—during a pandemic that has killed nearly one million Americans—and an accelerated clean energy transition to secure a livable planet are being stymied at every turn by corporate lobbyists and lawmakers in both parties.