The Donald Trump administration is ramping up its information war against Venezuela, Iran, and Syria. And it has enlisted social media platforms as weapons in its assault on these top regime-change targets.

In the first two weeks of January, Twitter suspended dozens of accounts run by real, live people — not bots — in Venezuela, Iran, and Syria. Those erased from the website included heads of state, numerous state institutions, media outlets, and many average people who do not work for their governments.

The supreme leader of Iran, president of Syria, and leader of Venezuela’s National Assembly have all had their Twitter accounts temporarily suspended or restricted in recent days. Numerous alternative media outlets have suffered the same fate.

At the same time, Facebook, and its subsidiary Instagram, has announced that it will be censoring content that it deems to be supportive of Iran’s top General Qassem Soleimani, who was assassinated in a US act of war on January 3.

The Big Tech giant said this censorship of users’ free speech will be done in order to comply with Washington’s suffocating sanctions on Iran.

This draconian crackdown on social media comes while the Trump administration is aggressively expanding its economic and diplomatic warfare against these independent countries, in hopes of ultimately overthrowing their sovereign governments.

The Grayzone spoke with some of the Venezuelan and Iranian civilian activists who do not work for their governments but who had their Twitter accounts suspended. They all said they were not given any warning, notice, or even an explanation why they were blocked from the platform.

As The Grayzone has previously reported, Big Tech corporations are closely linked to the US government, and have increasingly acted an extension of it, purging the accounts of officials from foreign governments that are targeted by Washington for regime change, also including China, Russia, Cuba, Palestine, and beyond.

Twitter has on numerous occasions suspended hundreds of accounts run by Venezuelans, in a series of purges targeting not only government-linked profiles but also those run by civilian activists from the leftist Chavista movement.

The social media giant has done this while simultaneously verifying and promoting the accounts of US-backed opposition activists and coup-mongers, like Juan Guaidó and his rapidly fading shadow regime.

The Grayzone has previously reported on how Twitter relies on organizations funded by the US government and European allies to crack down on foreign state media and suspend accounts that challenge Washington’s narratives.

On January 7, the Big Tech corporation carried out yet another round of suspensions. And even when The Grayzone contacted with the company with a request for comment, it still did not give a clear reason.

Together, these blocked accounts had millions of followers.

The accounts of Venezuela’s Central Bank and Ministry of Economics and Finance were temporarily taken down, but later restored.

Venezuelan media outlets that challenge the right-wing narratives pushed by the major corporate media networks and Washington were also censored. Twitter suspended the accounts of the major radio station La Radio del Sur; the popular news website Red Radio Venezuela; and Ciudad CCS, the newspaper of the municipality of Caracas, the capital of the country.

Twitter has even on numerous occasions suspended the accounts of Venezuela’s elected President Nicolás Maduro, although in response to widespread outrage it later brought them back.

But not all the Venezuelans who were deplatformed worked for state-backed institutions. Popular Chavista activists like Patricia Dorta, who had nearly 40,000 followers; and Yepfri Arguello had their accounts suspended, without explanation, in the January 7 purge.

Individual government officials were targeted as well. Twitter suspended the accounts of Víctor Clark, the governor of the state of Falcón from the ruling United Socialist Party (PSUV); Jesús Suárez Chourio, the former general commander of Venezuela’s military; and Hugbel Roa, an elected represented in the National Assembly also from PSUV.

Kenny Ossa, a prominent activist advocating for technology education and freedom of access to information who serves as the president of Venezuela’s National Center of Information Technology, had his account removed for the second time.

Twitter also suspended the profile of prominent Venezuelan activist Freddy Bernal, a leader in the Chavista movement who helps oversee the government’s CLAP food program, which provides some 7 million families receive large boxes of food for a few pennies. His account was however later restored.

In its series of purges, Twitter has almost without exception targeted Venezuelans from the leftist Chavista movement, which Washington has tried to crush since it first came to power in the 1998 election of President Hugo Chávez.

But in what appears to be a first, Twitter even went after a major right-wing Venezuelan opposition politician in its January 7 purge.

The social media corporation restricted the account of Venezuelan lawmaker Luis Parra days after he was elected president of the National Assembly. Unlike the others censored by Twitter, Parra is from Primero Justicia, a right-wing opposition party that is backed by the US government.

The restriction of a right-wing Venezuelan opposition leader at exactly the moment when that figure was condemned by Washington is among the clearest indications of the US government’s influence over Twitter.

The Grayzone spoke with Dhaymi Peña, who manages the station La Radio del Sur whose account was suspended by Twitter. She said the social media worker who runs the account was sent a notice that their profile was taken down, and provided a link to Twitter’s guidelines. “But there was not a direct reason,” Peña said, “rather just the general rules.”

“It is difficult for us,” she commented, noting that other Venezuelan media outlets have also suffered from these suspensions.

Vanessa Gutiérrez, a Venezuelan journalist who hosts a show on La Radio del Sur, has also had her own personal Twitter account suspended twice. She told The Grayzone that her profile was suspended for the second time in October 2019, but after numerous petitions to the company, it was later restored.

“There was a massive attack against accounts run by the government and media outlets,” Gutiérrez said. “It seems like they were trying a test run.”

“When they suspend the accounts, they always direct you to the rules. But they don’t give you proof of the ‘infraction,’” she explained.

The Venezuelan journalist added, “There is no excuse given, they simply silence us.” 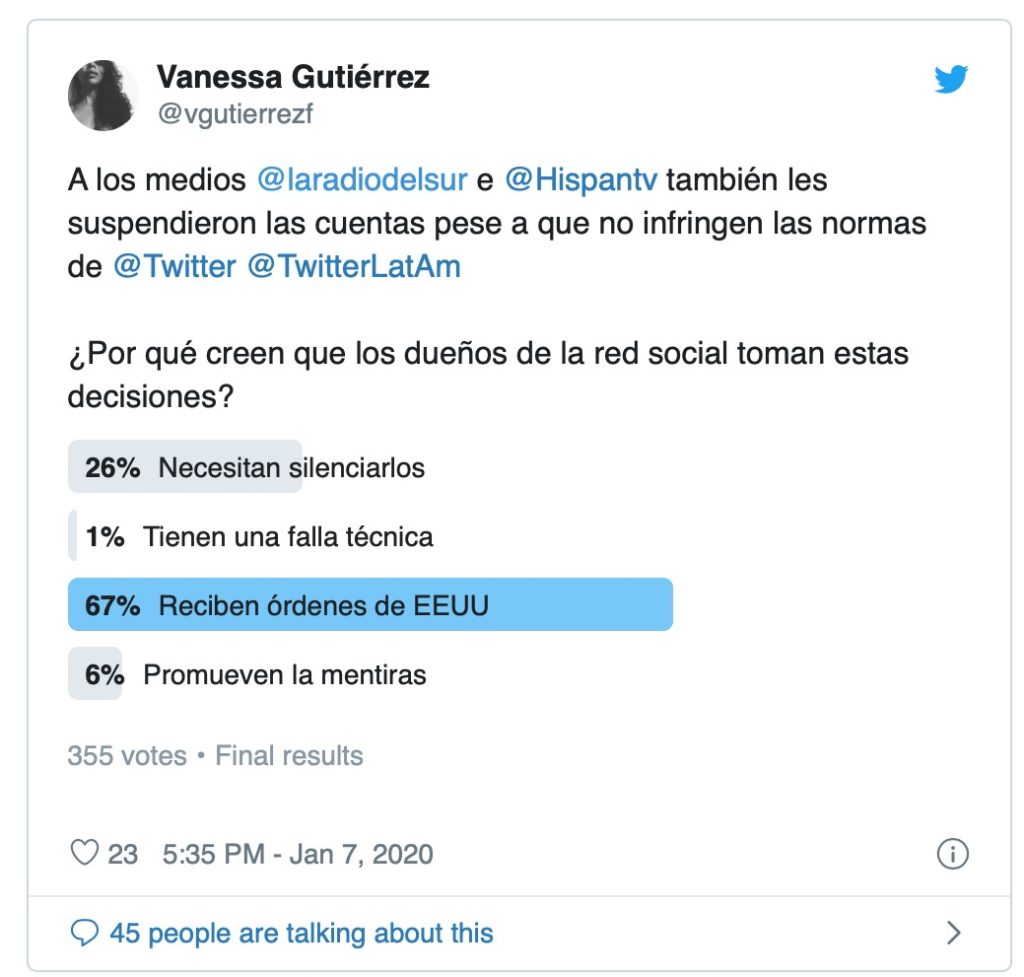 Iran has also faced a wave of social media censorship at precisely the same time it has come under the gun of the US government. Iranian officials, media outlets, and activists have been censored by Twitter in an accelerated purge this month.

The Grayzone has previously documented how Google, Facebook, and Twitter have removed social media accounts of real-life Iranians, including journalists.

In the wake of the Trump administration’s execution of Iran’s top general Soleimani, a clear act of war, Twitter moved to restrict the account of Iran’s supreme leader, Ayatollah Ali Khamenei.

Twitter has also in the past suspended Khamenei’s Spanish-language account. And it has even banned an account that posted videos and excerpts of speeches of Iran’s first supreme leader, Ayatollah Ruhollah Khomeini. 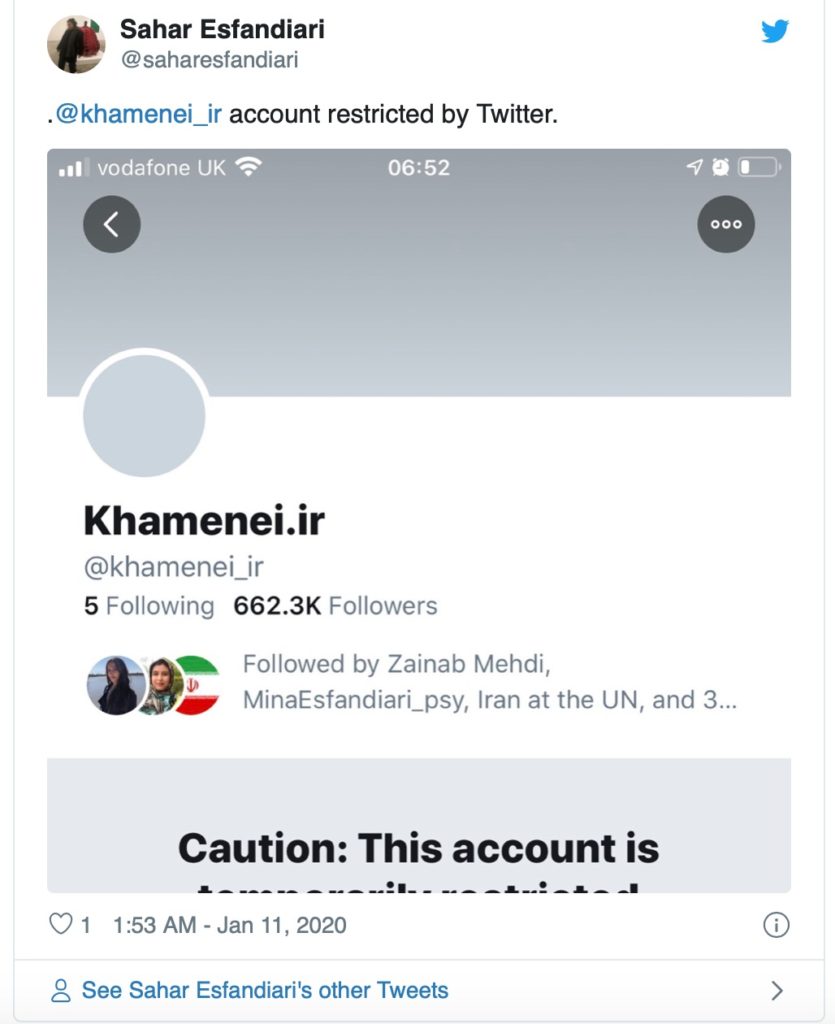 In the days after the US airstrike that killed Soleimani, Twitter likewise suspended the official account of HispanTV, an Iranian government-backed Spanish-language media outlet that is popular in Latin America.

After a massive backlash, however, the Big Tech corporation agreed to restore HispanTV’s profile.

In addition to HispanTV, Twitter has suspended the account of the Iranian state-backed media outlet Al-Alam News.

Many individual Iranians have been targeted as well. Users posted lists of dozens of Iranians who had their accounts taken down. These included manyprominent activists, journalists, and researchers who challenged Westernpropaganda and disinformation against their country.

Ahmad Nozoori, an Iranian researcher and political analyst who does not work for his government, had his Twitter account suspended after spending years building up his following. 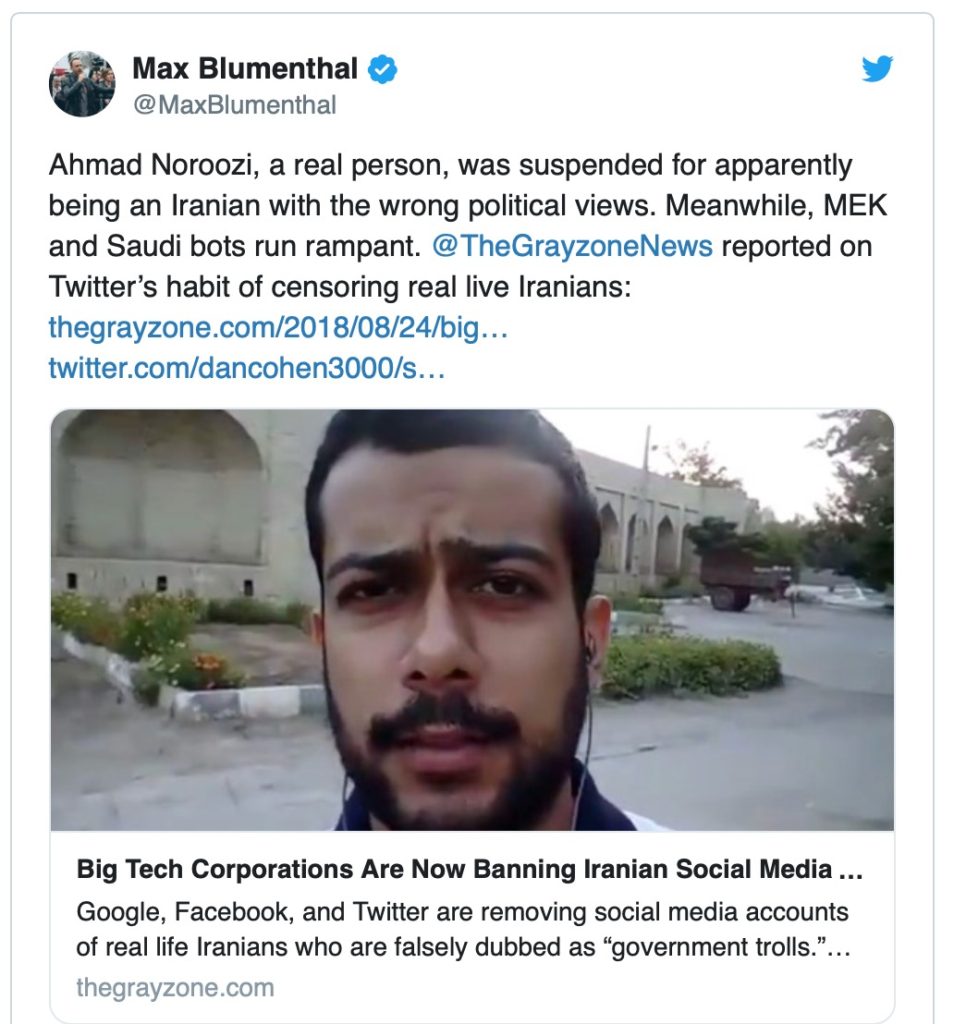 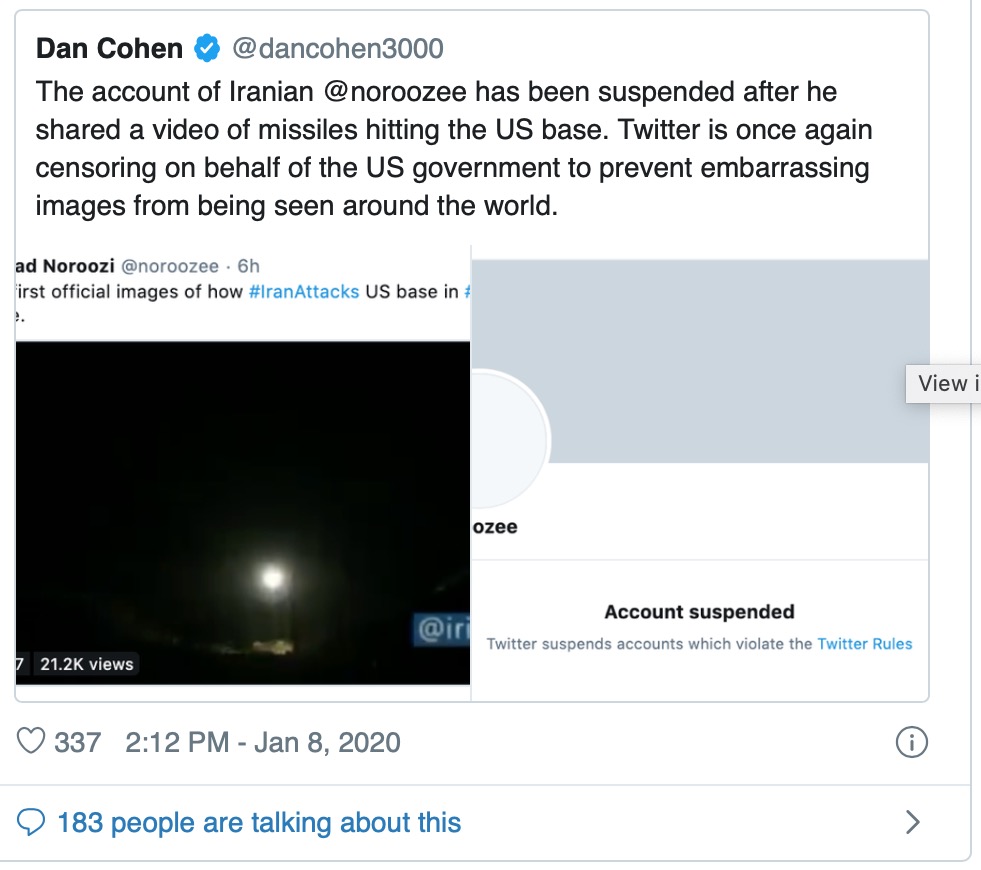 “I couldn’t believe they did this,” Noroozi told The Grayzone. “In fact, I hardly use Twitter on an every day basis. My usage was limited to follow some friends and journalists.”

“The world has to know what is really going on,” Noroozi said. “Secretary Pompeo was with the idea that people of Iran and Iraq would cheer the assassination [of Soleimani]. The US media was promoting the same nonsense and depicting martyrdom of Soleimani as a good thing. What is the benefit of citizen journalism if you can’t use social media platforms to tell the reality?”

“I tried to update my followers over Twitter about the situation with both my eyewitness reporting – mostly with my own taken images and videos – and the news Iranian media provided about the retaliatory attack on the US base,” he explained. “It is clear the mind-controllers didn’t like that I do my reporting in English. They would rather keep everything in the dark and spread their one-way narrative.”

It is not just government institutions, media outlets, and activists who have been targeted by Twitter’s purge. The Big Tech corporation has even gone after foreign heads of state whom Washington has been trying to overthrow.

Syria has also been targeted in these Twitter crackdowns.

Twitter has repeatedly suspended and restricted the profile of Syria’s president, forcing the country’s presidential office to create multiple accounts (neither of which has verified by the company).

As with Iran and Venezuela, Syria’s government is internationally recognized and sits at the United Nations. But the United States and its allies have been committed to toppling all of these governments and replacing them with right-wing opposition factions that are subservient to Western interests. And social media corporations have dutifully catered to Washington’s agenda, stiffing free speech in the process.

The Grayzone contacted Twitter with a detailed request for comment responding to the main points made above.

A spokesperson from the company responded with just two boilerplate sentences: “Twitter has proactive systems which aim to detect platform manipulation at scale as part of our focus to improve the health of conversations on the service. Sometimes this might result in false positives, which can be appealed by any account owner.”

Twitter is by no means the only social media corporation targeting the US government’s Official Enemies. Instagram and its owner Facebook have also suspended hundreds of Venezuelan, Iranian, and Syrian accounts, expressly citing US government sanctions as the justification.

Days after Facebook censored a video from The Grayzone that reported factually on the speeches of Iranian Supreme Leader Khamenei and Lebanese Hezbollah Secretary-General Hassan Nasrallah, the Big Tech company took down a video of a Syrian Christian pastor who praised Iranian General Soleimani for defeating ISIS and other Takfiri extremists.

Lebanese researcher Hadi Nasrallah translated and published a video of the Syrian Christian reverend Ibrahim Naseir, whose church was destroyed by Western-backed Salafi-jihadists that occupied the city of Aleppo.

In his post, Hadi Nasrallah wrote “Q*ssem S*leim*ni,” afraid that using the late general’s full name would trigger Facebook’s algorithm. But his video and post were still removed, showing how the US-based social media corporation is stifling the speech of people thousands of miles away in Lebanon.

These increasingly authoritarian crackdowns show more and more how Big Tech corporations act as an arm of the US government and its foreign policy.

In 2018, when Facebook removed the pages of alternative media outlets that challenged Washington’s narratives, Jamie Fly, a US government-backed neoconservative operative, promised that it was “just the beginning.” (Fly soon after became the president and CEO of the US government’s propaganda arm Radio Free Europe/Radio Liberty, or RFE/RL.)

Fly’s vow came true in the early weeks of 2020, as the US military-intelligence apparatus pushed social media giants to suppress the viewpoints of millions of people across the globe, especially those living in designated enemy states.

This is government censorship by proxy, demolishing civil rights in order to conceal inconvenient facts from the public.