‘This is a tipping point’: Justice Thomas must resign, says AOC

Congresswoman Alexandria Ocasio-Cortez on Tuesday became the latest Democratic lawmaker to demand that U.S. Supreme Court Justice Clarence Thomas resign in the wake of new revelations that his wife, right-wing activist Ginni Thomas, pushed at least one Trump administration official to try to overturn the 2020 election.

If Thomas does not step down, said the New York Democrat, his conduct “could serve as grounds for impeachment.” 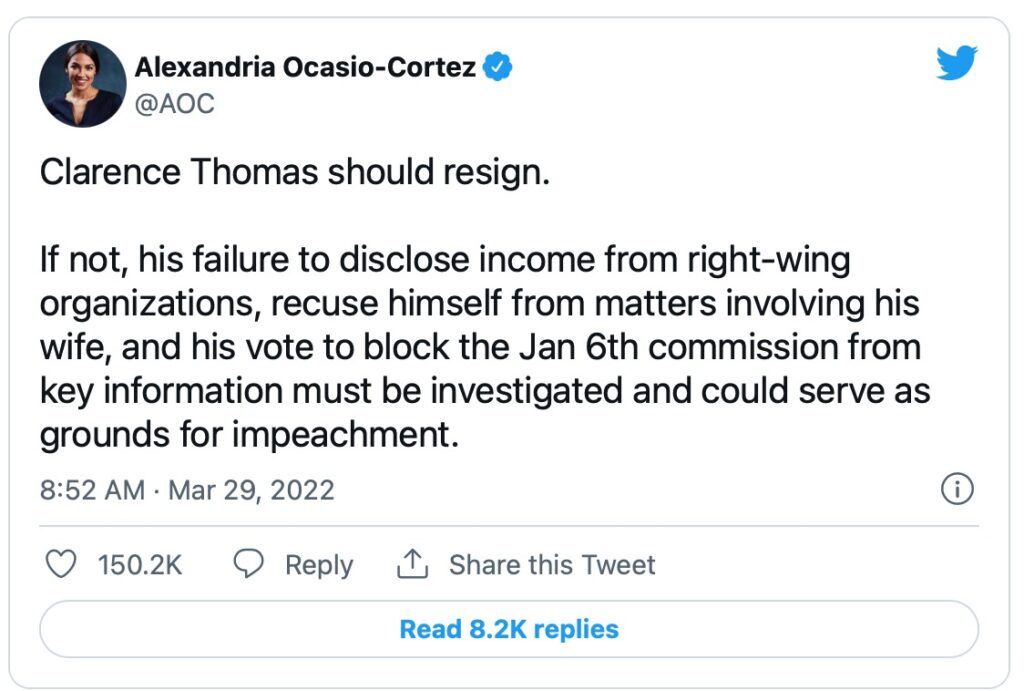 Government watchdogs and a growing number of Democratic lawmakers have argued that Thomas’ actions constituted a clear conflict of interest in cases her husband has heard since the election.

As Ocasio-Cortez noted on Twitter Tuesday, Justice Thomas dissented in a ruling regarding Trump’s attempt to block the congressional committee examining the January 6, 2021 insurrection from viewing White House records.

The justice has not recused himself from hearing at least 10 cases related to the 2020 election which his wife worked to overturn, according to The Hill.

Ocasio-Cortez joined lawmakers including Reps. Hank Johnson (D-Ga.) and Nydia Velázquez (D-N.Y.) in calling on Thomas to step down. Rep. Ilhan Omar (D-Minn.) was the first Democrat to call for Thomas’ impeachment, while Rep. Pramila Jayapal (D-Wash.) and Sen. Ron Wyden (D-Ore.) have demanded that the judge recuse himself from all cases involving the January 6 attack on the Capitol building.

Supreme Court justices are free to decide when it is appropriate to recuse themselves from hearing and ruling in cases; Jayapal called Thomas’ decision not to recuse “stunning” and “outrageous.”

“Clearly the Supreme Court is in need of ethics reforms,” she told Politico Tuesday.

Rep. Jerrold Nadler (D-N.Y.), chair of the House Judiciary Committee, which oversees impeachment powers and proceedings, told Politico Tuesday that he is “very concerned” about the reports of Ginni Thomas’ communications with Meadows, but said, “It’s much too early to talk about” impeachment or the possibility that Congress could censure Justice Thomas.

Ocasio-Cortez, however, said inaction by Congress would send “a loud, dangerous signal to the full court.” 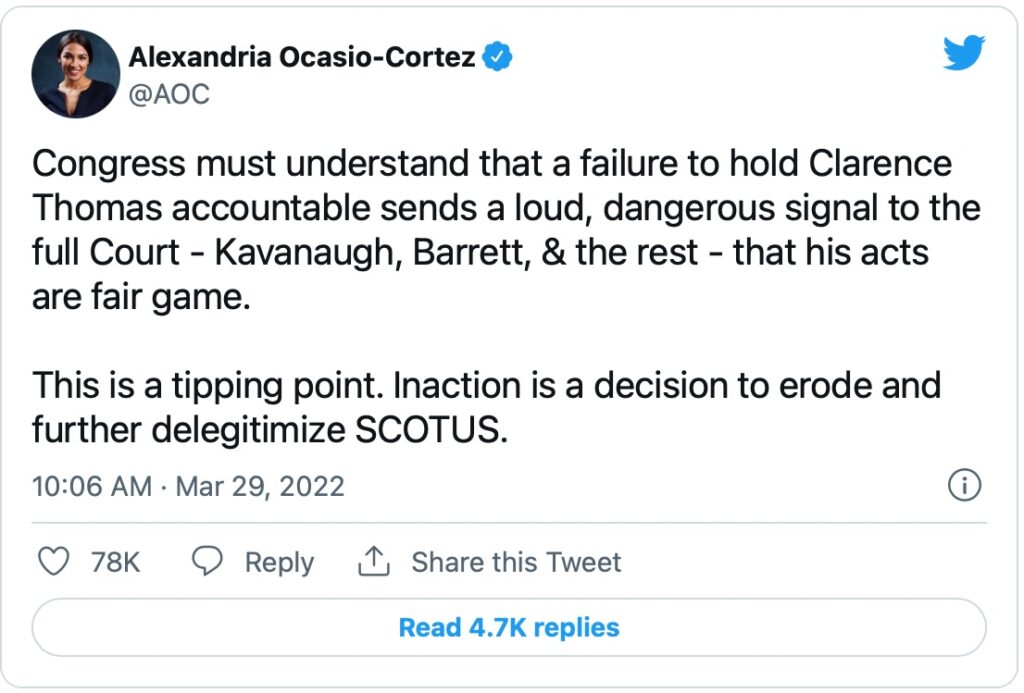 “This is a tipping point,” the congresswoman added.