One successful coup against a democratically elected socialist president is not enough, it seems.

Immediately after overseeing a far-right military coup in Bolivia on November 10, the Trump administration set its sights once again on Nicaragua, whose democratically elected Sandinista government defeated a violent right-wing coup attempt in 2018.

Washington dubbed Nicaragua a threat to US national security, and announced that it will be expanding its suffocating sanctions on the tiny Central American nation.

Trump is also turning up the heat on Mexico, baselessly linking the country to terrorism and even hinting at potential military intervention. The moves come as the country’s left-leaning President Andrés Manuel López Obrador warns of right-wing attempts at a coup.

As Washington’s rightist allies in Colombia, Brazil, Chile, and Ecuador are desperately beating back massive grassroots uprisings against neoliberal austerity policies and yawning inequality gaps, the United States is ramping up its aggression against the region’s few remaining progressive governments.

These moves have led left-wing forces in Latin America to warn of a 21st-century revival of Operation Condor, the Cold War era campaign of violent subterfuge and US support for right-wing dictatorships across the region.

A day after the US-backed far-right coup in Bolivia, the White House released a statement applauding the military putsch and making it clear that two countries were next on Washington’s target list: “These events send a strong signal to the illegitimate regimes in Venezuela and Nicaragua,” Trump declared.

On November 25, the Trump White House then quietly issued a statement characterizing Nicaragua as an “unusual and extraordinary threat to the national security and foreign policy of the United States.”

This prolonged for an additional year an executive order Trump had signed in 2018 declaring a state of “national emergency” on the Central American country.

Trump’s 2018 declaration came after a failed violent right-wing coup attempt in Nicaragua. The US government has funded and supported many of the opposition groups that sought to topple elected Nicaraguan President Daniel Ortega, and cheered them on as they sought to overthrow him.

The 2018 national security threat designation was quickly followed by economic warfare. In December the US Congress approved the NICA Act without any opposition. This legislation gave Trump the authority to impose sanctions on Nicaragua, and prevents international financial institutions from doing business with Managua.

Trump’s new 2019 statement spewed outlandish propaganda against Nicaragua, referring to its democratically elected government — which for decades has been targeted for overthrow by Washington — as a supposedly violent and corrupt “regime.” 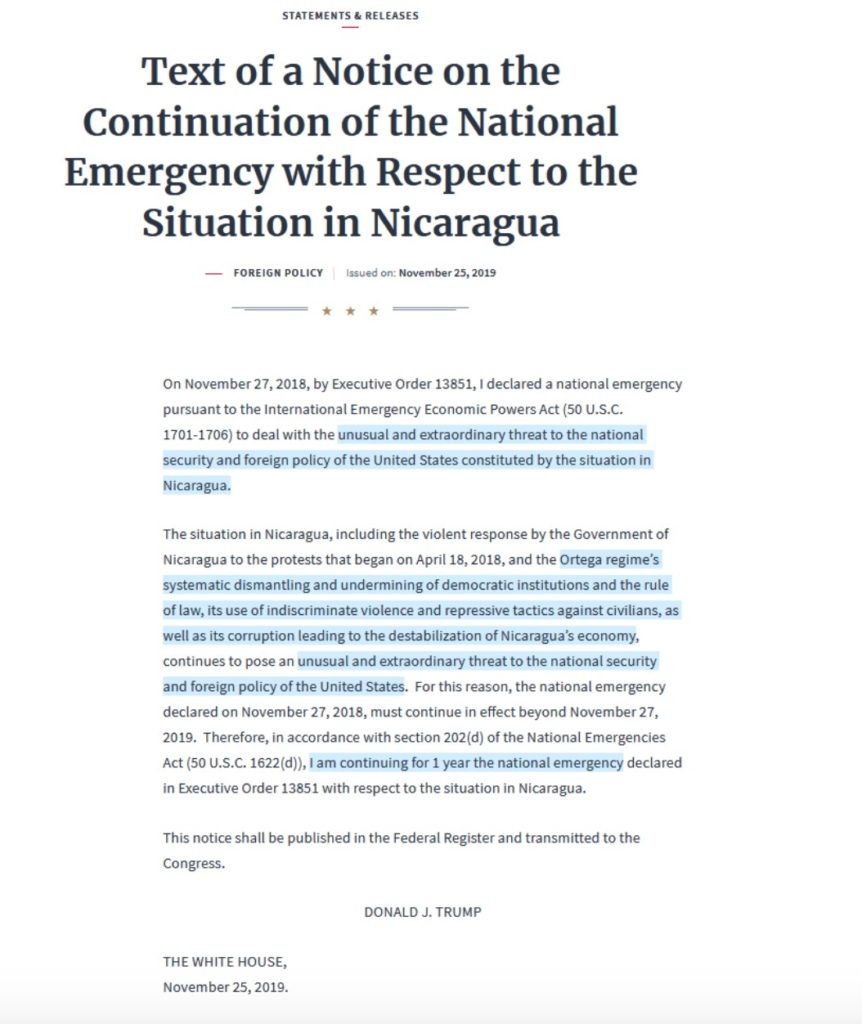 This executive order is similar to one made by President Barack Obama in 2015, which designated Venezuela as a threat to US national security.

Both orders were used to justify the unilateral imposition of suffocating economic sanctions. And Trump’s renewal of the order paves the way for an escalated economic attack on Nicaragua.

And opposition activists are gleefully cheering on the intensification of Washington’s hybrid warfare against Managua.

Voice of America (VOA), the US government’s main foreign broadcasting service, noted that the extension of the executive order will be followed with more economic attacks.

Washington’s ambassador to the Organization of American States (OAS), Carlos Trujillo, told VOA, “The pressure against Nicaragua is going to continue.”

The OAS representative added that Trump will be announcing new sanctions against the Nicaraguan government in the coming weeks.

VOA stated clearly that “Nicaragua, along with Cuba and Venezuela, is one of the Latin American countries whose government Trump has made a priority to put diplomatic and economic pressure on to bring about regime change.”

This is not just rhetoric. The US Department of the Treasury updated the Nicaragua-related sanctions section of its website as recently as November 8.

And in September, the Treasury Office of Foreign Assets Control announced a “more comprehensive set of regulations,” strengthening the existing sanctions on Nicaragua. 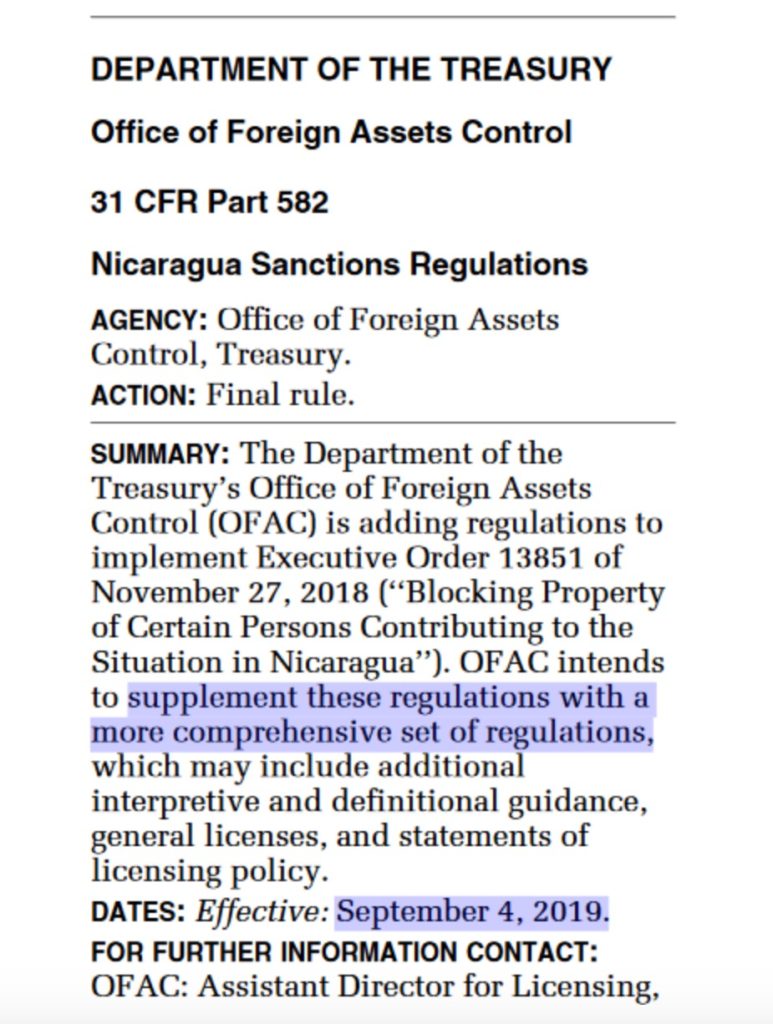 Voice of America’s report quoted several right-wing Nicaraguans who openly called for more US pressure against their country.

Bianca Jagger, a celebrity opposition activist formerly married to Rolling Stones frontman Mick Jagger, called on the US to impose sanctions on Nicaragua’s military in particular.

“The Nicaraguan military has not been touched because they [US officials] are hoping that the military will like act the military in Bolivia,” Jagger said, referring to the military officials who violently overthrew Bolivia’s democratically elected president.

Many of these military leaders had been trained at the US government’s School of the Americas, a notorious base of subversion dating back to Operation Condor. Latin American media has been filled in recent days with reports that Bolivian soldiers were paid $50,000 and generals were paid up to $1 million to carry out the putsch.

VOA added that “in the case of the Central American government [of Nicaragua], the effect that sanctions can have can be greater because it is a more economically vulnerable country.”

VOA quoted Roberto Courtney, a prominent exiled right-wing activist and executive director of the opposition group Ethics and Transparency, which monitors elections in Nicaragua and is supported by the US government’s regime-change arm, the National Endowment for Democracy (NED).

Courtney, who claims to be a human rights activist, salivated over the prospects of US economic war on his country, telling VOA, “There is a bit of a difference [between Nicaragua and Bolivia] … the economic vulnerability makes it more likely that the sanctions will have an effect.”

Courtney, who was described by VOA as an “expert on the electoral process,” added, “If there is a stick, there must also be a carrot.” He said the OAS could help apply diplomatic and political pressure against Nicaragua’s government.

These unilateral American sanctions are illegal under international law, and considered an act of war. Iran’s foreign minister, Javad Zarif, has characterized US economic warfare “financial terrorism,” explaining that it disproportionately targets civilians in order to turn them against their government.

Top right-wing Nicaraguan opposition groups applauded Trump for extending the executive order and for pledging new sanctions against their country.

The Nicaraguan Civic Alliance for Justice and Democracy, an opposition front group that brings together numerous opposition groups, several of which are also funded by the US government’s NED, welcomed the order.

While the US targeting of Nicaragua and Venezuela’s governments is nothing new, Donald Trump is setting his sights on a longtime US ally in Mexico.

In 2018, Mexican voters made history when they elected Andrés Manuel López Obrador as president in a landslide. López Obrador, who is often referred to by his initials AMLO, is Mexico’s first left-wing president in more than five decades. He ran on a progressive campaign pledging to boost social spending, cut poverty, combat corruption, and even decriminalize drugs.

AMLO is wildly popular in Mexico. In February, he had a record-breaking 86 percent approval rating. And he has earned this widespread support by pledging to combat neoliberal capitalist orthodoxy.

“The neoliberal economic model has been a disaster, a calamity for the public life of the country,” AMLO has declared. “The child of neoliberalism is corruption.”

When he unveiled his multibillion-dollar National Development Plan, López Obrador announced the end to “the long night of neoliberalism.”

AMLO’s left-wing policies have caused shockwaves in Washington, which has long relied on neoliberal Mexican leaders ensuring a steady cheap exploitable labor base and maintaining a reliable market for US goods and open borders for US capital and corporations.

On November 27 — a day after declaring Nicaragua a “national security threat” — Trump announced that the US government will be designating Mexican drug cartels as “terrorist organizations.”

Such a designation could pave the way for direct US military intervention in Mexico.

Trump revealed this new policy in an interview with right-wing Fox News host Bill O’Reilly. “Are you going to designate those cartels in Mexico as terror groups and start hitting them with drones and things like that?” O’Reilly asked.

The US president refused to rule out drone strikes or other military action against drug cartels in Mexico.

Trump’s announcement seemed to surprise the Mexican government, which immediately called for a meeting with the US State Department.

The designation was particularly ironic considering some top drug cartel leaders in Mexico have long-standing ties to the US government. The leaders of the notoriously brutal cartel the Zetas, for instance, were originally trained in counter-insurgency tactics by the US military.

Throughout the Cold War, the US government armed, trained, and funded right-wing death squads throughout Latin America, many of which were involved in drug trafficking. The CIA also used drug money to fund far-right counter-insurgency paramilitary groups in Central America.

These tactics were also employed in the Middle East and South Asia. The United States armed, trained, and funded far-right Islamist extremists in Afghanistan in the 1980s in order to fight the Soviet Union. These same US-backed Salafi-jihadists then founded al-Qaeda and the Taliban.

This strategy was later repeated in the US wars on Libya and Syria. ISIS commander Omar al-Shishani, to take one example, had been trained by the US military and enjoyed direct support from Washington when he was fighting against Russia.

The Barack Obama administration also oversaw a campaign called Project Gunrunner and Operation Fast and Furious, in which the US government helped send thousands of guns to cartels in Mexico.

Mexican journalist Alina Duarte explained that, with the Trump administration’s designation of cartels as terrorists, “They are creating the idea that Mexico represents a threat to their national security.”

“Should we start talking about the possibility of a coup against Lopez Obradorin Mexico?” Duarte asked.

She noted that the US corporate media has embarked on an increasingly ferocious campaign to demonize AMLO, portraying the democratically elected president as a power-hungry aspiring dictator who is supposedly wrecking Mexico’s economy.

Duarte discussed the issue of US interference in Mexican politics in an interview with The Grayzone’s Max Blumenthal and Ben Norton, on their podcast Moderate Rebels:

Now, a whisper campaign over fears that the right-wing opposition may try to overthrow President Andrés Manuel López Obrador is spreading across Mexico.

AMLO himself has publicly addressed the rumors, making it clear that he will not tolerate any discussion of coups.

“How wrong the conservatives and their hawks are,” López Obrador tweeted on November 2. Referencing the 1913 assassination of progressive President Francisco Madero, who had been a leader of the Mexican Revolution, AMLO wrote, “Now is different.”

“Another coup d’état will now be allowed,” he declared.

In recent months, as fears of a coup intensify, López Obrador has swung even further to the left, directly challenging the US government and asserting an independent foreign policy that contrasts starkly to the subservience of his predecessors.

In October, López Obrador even welcomed Cuban President Díaz-Canel to Mexico for a historic visit.

For Washington, an independent and left-wing Mexico is intolerable.

In a speech for right-wing, MAGA hat-wearing Venezuelans in Miami, Florida in February, Trump ranted against socialism for nearly an hour, threatened the remaining leftist countries in Latin America with regime change.

“The days of socialism and communism are numbered not only in Venezuela, but in Nicaragua and in Cuba as well,” he declared, adding that socialism would never be allowed to take root in heart of capitalism in the United States.

While Trump has claimed he seeks to withdraw from wars in the Middle East (when he is not occupying its oil fields), he has ramped up aggressive US intervention in Latin America.

Though the neoconservative war hawk John Bolton is no longer overseeing US foreign policy, Elliott Abrams remains firmly embedded in the State Department, dusting off his Iran-Contra playbook to decimate socialism in Latin America all over again.

During the height of the Cold War, Operation Condor thousands of dissidents were murdered, and hundreds of thousands more were disappeared, tortured, or imprisoned with the assistance of the US intelligence apparatus.

Today, as Latin America is increasingly viewed through the lens of a new Cold War, Operation Condor is being reignited with new mechanisms of sabotage and subversion in play. The mayhem has only begun.