Brazilian pollster IPEC’s latest survey shows da Silva leading Bolsonaro 47% to 31% in the first-round contest, which will take place on October 2. That’s a one-point boost from the previous week’s polling.

The IPEC poll also gives da Silva—the Workers’ Party candidate who previously served as Brazil’s 35th president from 2003 to 2010—a 19-point lead in a potential second-round runoff, which is scheduled for October 30 if no candidate wins over 50% of the vote in the first round.

Other pollsters also show da Silva enjoying a double-digit lead. Datafolha’s most recent figures give da Silva a 45% to 33% edge over Bolsonaro in the first round, with 90% of surveyed voters having decided for whom they will vote. 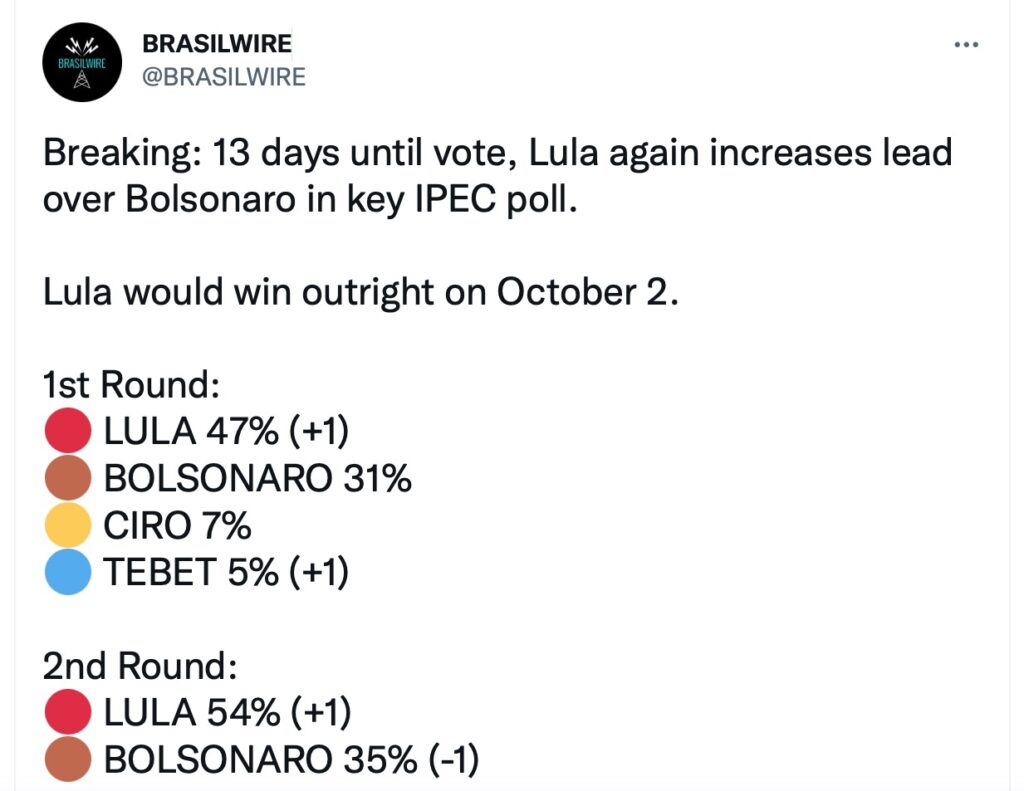 Bolsonaro—an open admirer of the former U.S.-backed 1964-85 military dictatorship in whose army he served as an officer—has said he might not accept the results of the election if he loses. There are widespread fears in Brazil and beyond that a beaten Bolsonaro may attempt to foment a coup or an insurrection along the lines of the January 6, 2021 attack on the U.S. Capitol by supporters of defeated former President Donald Trump.

Da Silva has been drawing massive crowds of supporters at recent campaign events, including a Sunday rally in the southern city of Florianópolis where he said that when “every woman and every child is eating three times a day, I will have completed my life’s mission.”

“All Brazilian democrats must unite and avoid the tragedy that would be the re-election of the current president,” said Cristovam Buarque, a former federal senator and member of the socialist party Cidadania who served as da Silva’s education minister.

After queen’s death, victims of British imperialism share why ‘we will…