The terminal will be part of an industrial development zone financed by the Chinese government and built with Chinese guidance. [For background in Progreso Weekly, click here.]

The work will be funded with a $120-million loan from Beijing and will be performed by the China Communications Construction Company, which also designed the terminal, AIN said. 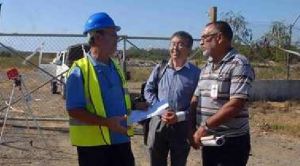 In the next three years, the Chinese company will build “a multifunctional terminal with modern technology, capable of handling ships of up to 40,000 tons in a 231-meter pier with three portico [gantry] cranes, two enclosed warehouses and an open area for containers,” the agency said.

At present, the port can handle ships of up to 20,000 tons. After the bay has been dredged to a depth of 14 meters, the port will be able to service ships of up to 40,000 tons. This will mean a potential processing of 565,000 tons of goods per year, according to Cuban specialists.

An advance party of Chinese engineers is already in Santiago. Drilling, on land and seabed, is expected to begin late this month with the participation of local workers.

Leonardo Naranjo, port services director, told AIN that the project will include a two-track rail line and a boardwalk for recreation. The latest models of machinery, such as front hoes, hoppers and roll trailers will be utilized, he said.

Santiago de Cuba has the nation’s second-largest port after Mariel. After expansion in both those ports is completed, the Port of Havana will be used only for tourism.

Cuba cancels invitation to China to send warships to Havana