For the 30th year in a row, almost every country on Earth voted at the United Nations to oppose the six-decade US blockade of Cuba.

On November 3, the UN General Assembly voted an overwhelming 185 to two to condemn Washington’s suffocating embargo.

The only countries that supported the illegal blockade were the United States itself and the Israeli apartheid regime.

Moreover, the real number of member states that would have voted against the blockade is 186. However, Venezuela was unable to do so because its UN voting rights were temporarily suspended, due to Venezuela’s inability to pay member fees to the United Nations, ironically because of the illegal US blockade and sanctions against it.

There are 193 members states of the United Nations. This means that 96% of the countries on Earth voted to condemn the US blockade of Cuba.

In June 2021, the vote was almost exactly the same. The only difference was that Colombia’s previous right-wing government had abstained, whereas its new left-wing President Gustavo Petro opposes the blockade.

Explicitly stated goal of US blockade: ‘to weaken the economic life of Cuba’ and ‘bring about hunger, desperation and overthrow of government’

The US embargo was officially declared in 1962, but in reality Washington began imposing illegal unilateral sanctions almost immediately after the victory of the Cuban Revolution in 1959.

Why has the United States waged such relentless economic war on Cuba for so many decades? An internal State Department memo from 1960 clearly explains Washington’s imperial intentions.

In the document, Deputy Assistant Secretary of State for Inter-American Affairs Lester D. Mallory admitted that the “majority of Cubans support [Fidel] Castro” and there “is no effective political opposition.”

“The only foreseeable means of alienating internal support is through disenchantment and disaffection based on economic dissatisfaction and hardship,” he concluded.

The top State Department official insisted that “every possible means should be undertaken promptly to weaken the economic life of Cuba.”

Washington’s goal, Mallory wrote, was to make “the greatest inroads in denying money and supplies to Cuba, to decrease monetary and real wages, to bring about hunger, desperation and overthrow of government.”

On October 28, there was a similar UN General Assembly vote in which the United States and apartheid Israel once again showed themselves to be rogue states on the international stage. An overwhelming 152 member states voted against just five to tell Israel to give up its illegal nuclear weapons and abide by the Non-Proliferation Treaty.

UN commission: US blockade has starved Cuba of $144.4 billion and is ‘the most severe and prolonged system of unilateral coercive measures ever applied against any country’

In the 2022 General Assembly resolution, the UN Development Program (UNDP) stated clearly that the US “embargo limited the acquisition of medicines and medical equipment and supplies, it affects the external economic relations of Cuba, and its impact can be observed in all spheres of the country’s social and economic activities.”

“The embargo has an impact on the population’s most vulnerable groups and on human development in general,” the UNDP wrote, adding that it “affects opportunities for national and local development and creates economic hardship for the population.”

The UN body cited official estimates that the illegal US blockade caused Cuba’s economy to lose $144.4 billion from the early 1960s to 2020.

In the resolution, the UN Economic Commission for Latin America and the Caribbean (ECLAC) added that the US blockade also affect third countries and companies, not just Cuba, writing, “The embargo imposes strict limitations on the Caribbean nation, with extraterritorial effects that hinder its relations with third countries and affect the well-being of the Cuban population.”

The UN commission noted that the Donald Trump administration imposed an additional 240 unilateral sanctions on Cuba, and that the Joe Biden administration has renewed the criminal economic measures.

“The numerous United States sanctions produce real harm that obstructs the access of Cuban citizens to basic goods and violates their rights,” the UN ECLAC wrote. “These policies are an obstacle to economic, social and environmental development.”

“In short, the numerous United States sanctions constitute the most severe and prolonged system of unilateral coercive measures ever applied against any country and continue to hinder the development of the potential of the Cuban economy,” the UN commission concluded. 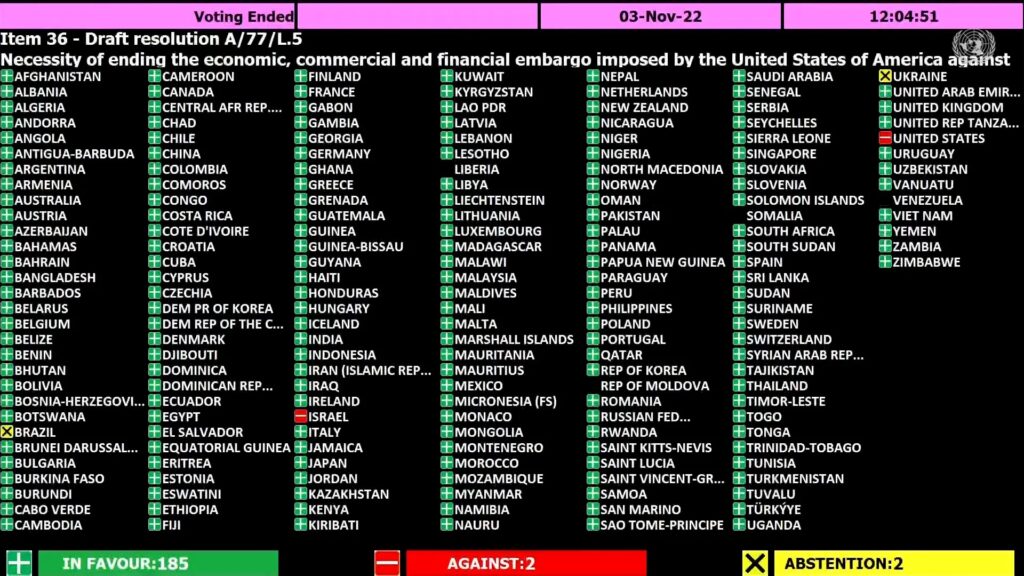 The UN resolution A/76/405, officially titled “Necessity of ending the economic, commercial and financial embargo imposed by the United States of America against Cuba,” was voted on at the 77th session of the 28th plenary meeting of the General Assembly.

The document received more than 170 pages of responses from dozens of member states and UN bodies explaining why Washington must end its illegal blockade.

Numerous international organizations explained how the US embargo greatly harms the Cuban population as a whole.

In pandemic conditions, the embargo remains in place, and its negative impact has been more specific and significantly larger than in previous years, particularly on commerce and financial activities.

The embargo limited the acquisition of medicines and medical equipment and supplies, it affects the external economic relations of Cuba, and its impact can be observed in all spheres of the country’s social and economic activities.

The embargo also maintains the restrictions on the use of the United States dollar and on imports from Cuba. It affects opportunities for national and local development and creates economic hardship for the population.

The embargo has an impact on the population’s most vulnerable groups and on human development in general.

According to official estimates, the cumulative direct and indirect losses for the Cuban economy owing to the embargo from the early 1960s until March 2020 amount to $144.4 billion at current prices.

The UN Economic Commission for Latin America and the Caribbean wrote:

During the Administration of President Donald Trump, over 240 coercive measures were activated against Cuba in the framework of the United States embargo against the island, and these still remain in force.

In fact, on 7 September 2021, the President of the United States, Joseph Biden, extended the law regulating the embargo against Cuba under the so-called Trading with the Enemy Act, until 14 September 2022.

In a memorandum addressed to the Secretary of State and the Secretary of the Treasury, the President ordered the extension of the sanctions that heavily limit trade with Cuba under these rules. Former President Trump had renewed these in September 2020.

The embargo imposes strict limitations on the Caribbean nation, with extraterritorial effects that hinder its relations with third countries and affect the well-being of the Cuban population. These restrictions deepen the multiple challenges imposed on the island by the coronavirus disease (COVID-19) pandemic and multiply its adverse socioeconomic, health and financial effects. On several occasions, they have hindered the arrival of humanitarian aid in Cuba.

The numerous United States sanctions produce real harm that obstructs the access of Cuban citizens to basic goods and violates their rights. These policies are an obstacle to economic, social and environmental development.

In short, the numerous United States sanctions constitute the most severe and prolonged system of unilateral coercive measures ever applied against any country and continue to hinder the development of the potential of the Cuban economy.

The embargo has intensified in recent years and has significantly constrained development possibilities in Cuba, greatly impacting the living conditions of the Cuban people. Among the effects, just to name a few:

• Restrictions on the transfer of remittances still imply a higher indirect tax burden on salaries legitimately earned abroad and sent for household spending on basic human needs such as food, clothing, education, housing, water and sanitation.

• Limitations on commerce and financial transactions still represent a serious bottleneck and an additional cost for business development and job creation, especially in sectors like agriculture and tourism, as decent work largely depends on productive investment and access to financing.

• Limited access to technology transfer implies further difficulties for enterprises, as well as for social and economic development.

The implementation of Title III of the Helms-Burton Act intensifies the embargo by affecting business and investment opportunities in Cuba for third-country investors; the creation of new job sources; and decent work in Cuba.

The direct and indirect effects of the embargo on the Cuban economy and people affect not only the enterprises, but even more their workers and the population in general. The International Labour Organization (ILO) is particularly concerned about the impacts on children, workers and the elderly. Ending the embargo would turn the overall loss into an opportunity for productive investment, employment generation and new business opportunities, as well as for achieving the Plan Nacional de Desarrollo Económico y Social hasta 2030 and other reforms aimed at improving the economic and social system, for example monetary unification and the expansion of self-employment schemes.

In the context of the coronavirus disease (COVID-19) pandemic recovery, the embargo is limiting the possibilities for the country to implement jobs and economic recovery strategies.

Given that Cuba is subject to an embargo, projects implemented by FAO in the country are affected with regard to the procurement of equipment and supplies that complement the technical assistance because the resources that could be imported from the United States have to be imported from far more distant markets, at much higher prices and higher freight costs. If acquisitions could be made in the United States, it would be much cheaper and more activities could be supported through the available budget.

The most recent embargo measures against Cuba, under which third-country companies trading with Cuba can be sued in United States courts, have had a negative impact on Cuban trade by drastically reducing the commercial partners that operate in the country. This has had a direct impact on the procurement operations that FAO carries out in Cuba in the framework of its technical cooperation projects.

Under the embargo, conditions hinder the processes of payments and banking transactions to and from suppliers who provide services for cooperation projects and to the FAO country office. This is demonstrated by banks’ rejections of transfers from FAO for sales to Cuba; the impossibility for suppliers to offer products to Cuba obtained from other North American companies; and the inability of suppliers to transfer funds to Cuba for payment of services contracted in the country.

In addition, banks reject commercial and financial transactions by Cuban enterprises in United States dollars and in other currencies, which hinders payment for certifications of Cuban products with a high potential to be commercialized in Europe.

FAO staff continue to be affected by expensive and long formalities in banking processes.

A summary of the negative effects caused by the embargo in some of the sectors in which FAO is providing technical support and other sectors included within its country programming framework is presented below.

The losses originated mainly in:

(a) Price differences owing to changes in the import market;

(c) Additional costs owing to a freeze of assets;

(e) Losses owing to lack of access to the latest technology from the United States;

The Office of the United Nations High Commissioner for Human Rights (OHCHR) wrote:

the Office of the United Nations High Commissioner for Human Rights (OHCHR) continued to express concern regarding the negative impact that extraterritorial sanctions have on human rights.

Seven United Nations human rights experts reiterated this in a message, requesting the United States of America to lift its economic and financial embargo on Cuba that is obstructing humanitarian responses to help the country’s health-care system fight the COVID-19 pandemic.

Particular difficulties were reported in countries subject to unilateral coercive measures, including Cuba, to obtain medical equipment vital to fight the pandemic, including oxygen supply and ventilators, protective kits and spare -parts software

The Human Rights Council expressed its grave concern that, in some countries, such measures impede the full realization of social and economic development and hinder the well-being of the populations, with particular consequences for women, children, the elderly and persons with disabilities.

the United Nations High Commissioner for Human Rights reiterated her call for the lifting of unilateral sectoral sanctions, given their negative impact on human rights, including the right to health.