We can’t say for sure if a haughty peasant girl inspired the popular Cuban song ‘Guantanamera,’ but we can say that the song expresses the cross-breeding of our native music and conveys it to the world in a universal tune.

That was acknowledged by Pete Seeger in 1963, when he played at Carnegie Hall the version with José Martí’s verses that Julián Orbón played in Havana get-togethers.

Also aware of that is Playing For Change (PFC), which has brought together 75 Cuban musicians to play ‘Guantanamera’ in a version that condenses the diversity of Cuban music today.

The fact is that music, perhaps Cuba’s most original creation, is a product of the mixture and wealth of its roots and, above all, a living expression of identity for all Cubans.

The song is one of eight pieces in the DVD “Playing for Change 3: Songs Around the World,” produced by U.S. singer/composer Jackson Browne.

Papa Orbe Ortiz, a Santiago musician living in Barcelona, says that “not since the Buena Vista Social Club have so many Cuban musicians gotten together. It is an encounter between musicians in Cuba and outside, where there is no room for politics or anything else that isn’t music and love.”

‘Guantanamera’ is played here by musicians of various generations, locations, styles and genres — from Havana to Tokyo, from conga bands to a concert orchestra, by young musicians like Gastón Joya and legends of Cuban music like Manuel Galbán.

Browne and Conte had the idea of recording the song in Havana and Santiago. Gradually, other musicians from other cities were added.

Fueled by cigars and mojitos

The tune could not be other than ‘Guantanamera,’ a song that is identified as Cuban anywhere in the world.

Browne coordinated the first recording in Cuba with Carlos Varela, whom he knew from previous projects, and Galbán, a guitarist with Los Zafiros and the Buena Vista Social Club, for whom the PFC producers and Browne himself felt great admiration.

That first recording, with Varela on guitar, Conte on bongoes and a backup group, was the backbone of the project, the base on which the producers built more verses recorded by other musicians.

“I think the music found us,” says Conte, who traveled with the team from Los Angeles, where he lives. They met Diana Fuentes on the plane while flying to Havana. They heard Joya on the first night the team spent in Cuba and invited him to participate. Varela contacted Ernán López-Nussa, the group Síntesis and Equis Alfonso.

After the first recording in Havana, the team continued to travel through Cuba and other cities, meeting people. ‘Guantanamera’ was assembled “between cigars and mojitos,” says PFC producer Enzo Bueno.

Trip to the roots

It was very easy to find good musicians in Santiago de Cuba. Eva Griñán, Diógenes Manfarrol and the Conga San Agustín were appearing as part of the city’s cultural agenda.

In a surprising encounter, the group La Pasión ran into the PFC team at the restaurant of the Hotel Casa Granda, where Browne and Conte were staying. “We weren’t expecting to meet them, but the group was so good that we had to record it, too,” says Enzo.

It is difficult to record so many musicians together in one session; normally, one or two are recorded at one time. But the PFCers did it; they put earphones on the bongo player and the bassist right in the Casa Granda restaurant and the orchestra backed them.

The producers knew that they had to include musicians from Santiago, the birthplace of “son” and the music known today as “salsa.” Not to mention ‘Guantanamera’ itself.

Being able to record Conga San Agustín, for instance, was a surprise that added authenticity to the song.

The Conga’s bokú, the “cookie [shallow]” drums and the metallic sound of automobile tire drums blended in ‘Guantanamera’ with the classical instruments of the Camerata Romeu. “Havana and Santiago are in opposite ends of Cuba,” Conte says. But the performances are “also opposite forms of music: concert music and African drums.”

An encounter of Cuban musicians

In Los Angeles, PFC recorded Riberto and Candi Sosa, the renowned Cuban singer who emigrated in the 1960s.

Browne himself recorded trumpeter Luis Valle during a tour of Tokyo; the PFC team recorded Reinaldo Elosegui and Orbe in Barcelona.

Orbe, who is a bassist in the band Playing for Change, left Cuba at the age of 19. Seeing the video reminds him of “musicians from Cuba and Miami whom I hadn’t heard of in years. The musicians from Santiago de Cuba reminded me of my childhood, when I sat at Céspedes Park and Heredia Street to listen to old men talk and make music.”

During the production team’s second trip to Cuba, the local musicians were surprised to see videos of compatriots who had emigrated. “Look at that Nuviola girl!” they’d say. “There was mutual recognition on both sides,” Enzo says.

Conte, who emigrated at the age of 15, had the experience of returning to his homeland to record ‘Guantanamera’ after 40 years, as a recognized musician. Conte has shared the stage with performers like Madonna, Al di Meola, Andy Narell, the Pat Metheny and Phil Collins group, but says that his “dream had always been to return to Santiago and play with an authentic eastern conga, the real eastern drum band.” He did so with ‘Guantanamera.’

“The nicest thing that could happen is when music breaks barriers. I think that the video captures that emotion. And those who are not Cuban can enjoy good music, Martí’s poetry, and find out what Cuban musicians are doing inside the island and outside,” Enzo says.

‘I give you my inspiration’

When Browne proposed recording ‘Guantanamera’ in Cuba, PFC said yes, at once. They had always appreciated Cuban music but they thought it would be difficult to work in Cuba because of political restrictions. Now, the idea was to record a song throughout the world, with a deep message of unity through music.

In Cuba, they found cooperation, even from those who didn’t know PFC. When they showed the classic DVD “Stand by me,” and explained what they were trying to do, the musicians agreed immediately. “Hey, let’s record,” they’d say.

Browne said that traveling to Cuba with PFC was “one of the most gratifying and stimulating experiences of my life.” Enzo acknowledges that ‘Guantanamera’ is his favorite song in the PFC-3 recording.

“I like them all, but that one I like best,” he said. “The song, the video and the musicians have many stories to tell. Cuba has been one of the places that have influenced us the most, in terms of music. Also, everywhere there is a picture. It wasn’t difficult to record a musician because everything came out just right.”

‘Guantanamera’ was recorded in places as diverse as the Convent of St. Francis of Assisi and the Hamel backstreet in Havana; the Cubaocho Art Center in Miami; Venice Beach in Los Angeles, and the Santiago arcade where Diógenes Manfarrol’s daughter starts dancing to the rhythm of the marimbula.

‘Sing Guantanamera with me’

Playing for Change began as a multimedia project that connected street musicians but today it develops several activities that contribute to a greater objective: to inspire and unite the world through music.

Approaching its 10th anniversary, it has a production department, whose third album is the one that contains ‘Guantanamera’; a foundation that has built nine schools in poor countries; and the band Playing for Change, with musicians from Congo, Cuba, the U.S., Holland, Israel, Italy, Japan, South Africa and Zimbabwe, among others. 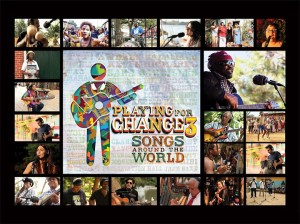 ‘Guantanamera’ is the last item in PFC-3, where 185 musicians from 31 countries play hits such as ‘La Bamba,’ ‘Get Up, Stand Up’ and ‘A Better Place.’

‘Guantanamera’ is the first of the projects that PFC intends to develop in Cuba. Among them is the recording of another song and the construction of a music school. Both projects are in the works.

Pete Seeger took ‘Guantanamera’ to more than 35 countries and turned it into the most popular Cuban tune. Playing For Change returns it to Cuba, played by its own musicians, through the Internet and the social networks, in a version that has amassed more than 200,000 views in less than a month, in YouTube and Vimeo.

This ‘Guantanamera’ has Martí’s verses but also an improvisation by Joseíto Fernández: “In a faraway field, on a street like any other, on the mountains, on the plains, on a street corner in Havana, I give you my inspiration, wide as the prairie. You, who listens to my song, sing with me ‘Guantanamera’.”