Hanoi – The Vietnam-Cuba Intergovernmental Commission concluded its 31st session today with the signing of a protocol establishing a medium-term agenda for areas of cooperation in the medium term and projections for the future. 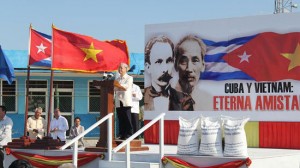 Before signing the document, the commission’s co-chairs, Vietnamese Construction Minister Thri Dung Ding and Cuban Minister of Foreign Trade and Investment Rodrigo Malmierca, both highlighted a common will to overcome difficulties with a critical spirit.

Three days of work reflected the determination on the part of both countries’ parties, States and governments to elevate their economic and commercial relations to the level of their political relations, exploring potentialities, opportunities and possibilities for complementariness.

Malmierca expressed satisfaction at the work accomplished and his conviction there were business opportunities in diverse branches, while Ding stressed that it was the will of both peoples to advance for mutual benefit.

At the closing ceremony, the president of Cuba’s Institute of Physical Planning, Samuel Rodiles Planas, and Vietnam’s director of Urban and Rural Planning, Ngo Trung Hai, signed an agreement for a cooperation project to develop Vietnam’s coastal population based on Cuba’s experiences.

HAVANA – The Vietnamese ambassador in Cuba, Vu Chi Cong, received here today the Medal of Friendship for his labor to strengthen the links of friendship and cooperation existing between both brotherly nations.

In the venue of the Ministry of Foreign Relations, Cuban Minister Bruno Rodriguez, handed the Vietnamese ambassador the award issued by the Council of State of this Caribbean nation.

Referring to the dedication of Cong during the last six years at the service of this nation, the Vice Minister Rogelio Sierra, described the ambassador as a booster of transcendent moments of bilateral relations between Hanoi and Havana.

The Vietnamese representative offered his thanks and underlined that his work here was only possible thanks to the Revolution led in his country by Ho Chi Minh and in Cuba by the historic leader Commander Fidel Castro.

He recalled, also, that at the beginning of his career as translator, he collaborated with then Foreign Minister Raul Roa.

On Wednesday, the 40th anniversary of the historic leader’s trip to the liberated zones of South Vietnam, was commemorated here.

Recently, both governments reinforced economical and commercial links in areas like agriculture, pharmaceuticals, construction, tourism, and retail sales service, among others.

Laying a wreath at Jose Marti’s tomb in his mausoleum in Santa Iphigenia cemetery was the first activity for the Vietnamese guests, who also held meetings with political and government authorities.

Speaking to reporters, Van Dua stated that the visitors saluted the 40th anniversary of a visit by the historic leader of the Cuban Revolution, Fidel Castro, to liberated areas during the war of Vietnam against the imperialist aggressors.

He also noted that it was the 50th anniversary of the creation of the Cuba-Vietnam Friendship Association, which has carried out recognized work for closer relations and unity between the two countries.

Van Dua described the close ties between the Vietnamese and Cuban people as a magnificent symbol of friendship and example for humanity, tested in the toughest moments and revitalized with the imperative to preserve and enhance the social and economic achievements of both.

The Vietnamese delegation will tour historic city sites, mainly those related to the attack on the Moncada barracks carried out by young revolutionaries led by Fidel Castro on July 26, 1953.

U.S. blockade zeroes in on Cuban student at Harvard