Updates on Cuban migration to the U.S.

By Center for Democracy in the Americas Last updated Nov 9, 2022
Share FacebookTwitterEmailGoogle+ReddItWhatsAppPinterest 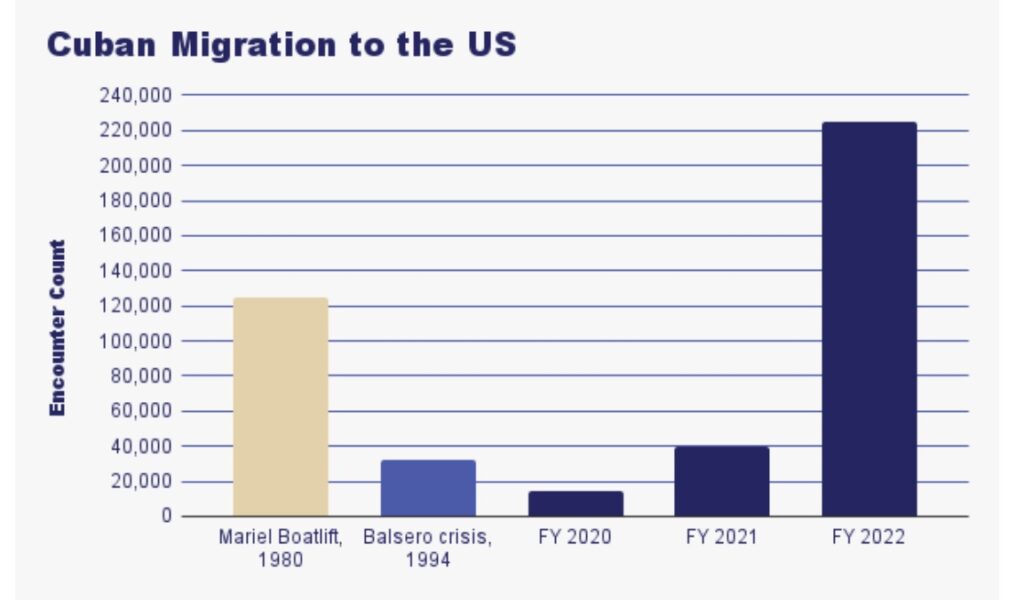 Source: Elaborated by CDA with data from the U.S. Customs and Border Protection (CBP)

In Fiscal Year (FY) 2022, U.S. Customs and Border Protection (CBP) reported 224,607 total “encounters” with Cuban migrants and asylum seekers. In the month of September 2022 alone, 26,742 attempts at entrance into the US through land and sea borders were made by Cuban migrants, up 37 percent from the previous month.

Cuban migration to the US in FY 2022 eclipsed the previous two largest waves of Cuban migration – the Mariel boatlift in 1980 and Balsero crisis of 1994 – combined. “Encounters” constitute either an expulsion, in which migrants are deported to their home country or last country of transit, or apprehension, in which migrants are detained in the US, by CBP.

The number of encounters therefore can vary from the number of individuals who attempted entrance into the US as some individuals have made repeat attempts to enter and therefore had multiple encounters with CBP. However, Cubans in particular are less likely than other nationalities to make repeat attempts because so far the vast majority of Cubans have not been subject to immediate expulsion (as under Title 42) and instead are being placed in U.S. immigration removal proceedings. As a result, the figure of 224,607 encounters with Cuban nationals is likely to approximate the actual number of Cubans who have crossed rather than repeated attempts.

Perspectives on Cuba’s current migration wave and the role of U.S. policy

The future of cryptocurrency in Cuba